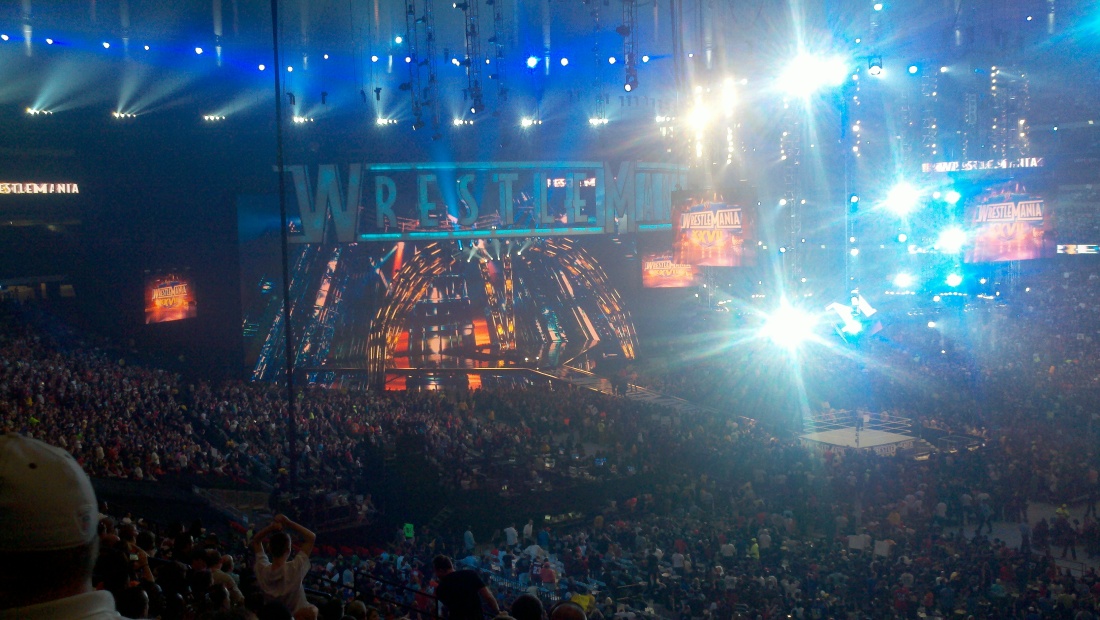 Some people have a bucket list and on that list are items like sky diving, going to Italy, bungee jumping etc… One of those items for me is going to a Wrestlemania. It’s the mecca of all wrestling events.

Now mind you, I haven’t actually watched wrestling in a good 6 or 7 years so I am not up to speed on storylines or anything that is actually going on but there are definitely some names and faces that I recognize, shout out to The Rock, Triple H and the Undertaker for putting on a amazingly entertaining show but for the most part things have gone downhill since how I remember them.  Maybe I have just gotten old but needless to say, I had an amazing time to just being a part of something that held 71 thousand screaming fans. It was certainly an awesome evening of entertainment.

Love it or hate it, professional wrestling has been around long time and one of the things that I would certainly expect was for the WWE to be doing a much better job of presenting themselves via social media channels for their overly enthusiastic fan base to latch on to.

At the WWE’s disposal they have, to quote The Rock, “The Millions and Millions of the WWE’s fans” in the palm of their hands so why not give these fans something to share and spread to their respective networks?  There just is nothing that is very engaging across any of their properties.

With all of the superstars identities and social profiles that need to be maintained you would think that they would have a very sophisticated social media management system in place to handle all of these social media entry points. This would help them avoid any possible PR missteps and help to create a very engaging experience for fans.

Case in point – a few weeks ago, on air personality and play-by-play commentator Michael Cole tweeted a gay slur.

How on earth did this make it past the WWE executives and get published for over 35k followers to see? You see Michael Cole tweets “in character” which somehow, according to the WWE, provides some sort of rationale for the offensive slur he used. Now, if the WWE had a social media management system in place that tweet would of needed to be approved or disapproved. With the proper tools in place they could create a very strong infrastructure of social media messaging that never goes off point from the image that the WWE brand wishes to represent.

The WWE, you’re a monster of a brand and much like your amazingly entertaining characters that lay the smack down every week, you truly could lay the smack down across social media if harnessed properly. After all why not mobilize those millions upon millions of fans to carry your message, which as a result would greatly expanding your merchandising sales efforts.

Or, maybe the WWE just doesn’t want to make more money? Either way I am a fan and it was a Wrestlemania to remember. Scratch that off my bucket list.

One thought on “Wrestlemania in Atlanta & The Social Media Smackdown”

Who is Adam Lazzara?

Sales Engineering leader in SaaS technology for 10+ years specializing in social media and listening platforms working with Enterprise and mid market customers. It's been a long and crazy journey.

Proud husband to one, dad to twin boys, gamer, tech geek, sports fan, lover of foods, and sneaker head (much to my wife's displeasure)

Extremely vocal supporter of equality for all. #Resist